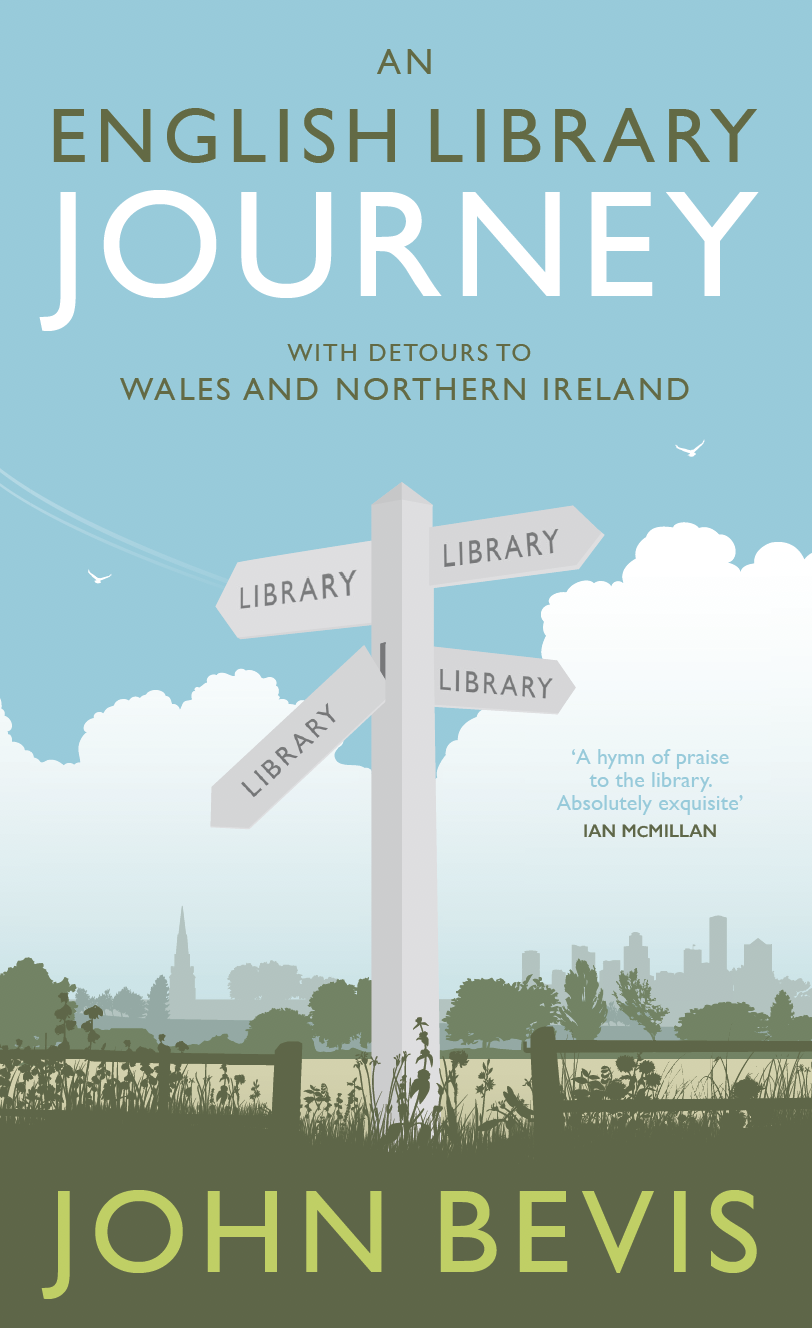 With Detours to Wales and Northern Ireland

‘A hymn of praise. Absolutely exquisite’

John Bevis is a writer and book-lover on an eccentric quest: to obtain a membership card from every library authority in England.

In a ten-year mission criss-crossing the country – from Solihull to Slough, from Cleveland to Cornwall – he enrols at libraries of all shapes and sizes: monuments to Art Deco or Brutalism; a converted corset factory; one even shaped like a pork pie.

With the architectural eye of Pevsner and the eavesdropping ear of Bill Bryson, he engages us at every step with anecdotes and aperçus about the role of the public library in our national life, while ruing its decline in the age of austerity.

As interested in the people he finds as he is in the buildings and their history, he is a humane, witty and erudite guide. The result is a book to be treasured by anyone who has ever used a library.

Newport, Shropshire. I’m a few weeks into recuperating from an operation, and under doctor’s orders not to lift anything much heavier than a paperback. With the day job on hold, writing has changed from being a hobby to a full-time occupation, and I’ve been trying to fill my time wrapping up some unfinished projects. But somehow writing at home, all day long, is harder than cramming it in to stolen moments before or after work. I feel dulled by the spare-bedroom-turned-office atmosphere, the stifling stillness, as if the house was a fitfully sleeping toddler and I’m having to tiptoe around trying not to wake it. The lack of distraction is the worst of distractions. I’m gagging to phone someone, nip down the road for a newspaper, grab another cup of tea. Or I was. That was before I thought up my brilliant exit plan.

Newport, Shropshire. I’m a few weeks into recuperating from an operation, and under doctor’s orders not to lift anything much heavier than a paperback. With the day job on hold, writing has changed from being a hobby to a full-time occupation, and I’ve been trying to fill my time wrapping up some unfinished projects. But somehow writing at home, all day long, is harder than cramming it in to stolen moments before or after work. I feel dulled by the spare-bedroom-turned-office atmosphere, the stifling stillness, as if the house was a fitfully sleeping toddler and I’m having to tiptoe around trying not to wake it. The lack of distraction is the worst of distractions. I’m gagging to phone someone, nip down the road for a newspaper, grab another cup of tea. Or I was. That was before I thought up my brilliant exit plan.

I like Newport. It’s only fifteen miles or so from our Shropshire home, and we come here once in a while for a drink or to look around the antiques centre. Ozzy Osbourne owned a wine bar down the road. ‘All day long I think of things but nothing seems to satisfy,’ he sang. Not just me, then. Walking down the High Street I spot the library across the road, the public areas on the ground floor, a modern generic fit-out whose glass curtain walls extend the width of two shopfronts. But the upper storeys are a family at war: the lefthand building stolid in its plain stay-at-home neo-Georgian brick, while to the right is the crazy cousin, a Gothic stone archway with castellated battlements. Not a militia barracks it turns out, but all that’s left of an eighteenth-century folly that housed a wool merchant and draper. This library is a building of three halves.

Inside, one alcove is given over to some large study tables with half a dozen chairs at each. I stake my claim on one with notebook and pencils and set to. Result! The sounds of people talking or moving about, the swoosh of the automatic entrance doors opening and closing, noises that might have been intrusive and distracting, come together to create the low-level buzz of activity I’ve been starved of. Jeanette Winterson, writing of her childhood haunt, Accrington Public Library, described the ‘sense of energetic quiet’. And the feeling I have of somebody, some spirit of composition, invigilating over my shoulder encourages me to concentrate and to persist. At home, an osmosis between the roles of writer and househusband leaches the best of whatever each has to offer.

To the side of the room, other visitors are sitting at a rank of desks with computers. I prefer drafting in pencil on paper, but at some point everything gets transcribed to digital, and it could be useful to do that now, rather than wait till I get home. I ask a librarian at the enquiries desk if I can use one of the PCs. I’m told I have to be a member, and if I want to join she will need to see two forms of ID, with my Shropshire address. I have my driving licence, and by chance had put that morning’s post, including a utility bill, into my bag. So, with a little form-filling, I become the possessor of my first public library membership card since 1975, when I moved to London and joined Maida Vale library. In my memory, the card they issued me then was a cardboard sleeve with plastic punch cards to be handed over each time you withdrew a book, a relic from a clunky age of mechanical data processing. This new one looks like a credit card, with a bar code, serial number and signature strip.

I type up my notes and edit them, go online, check my inbox, then email my day’s work to myself. Sorted. And the great thing is, I can now walk into any Shropshire library, on any single day, and have an hour’s access to a computer. Very useful, except that most of the time I am not going to be in Shropshire. I am going to be all over the place.

Which is where the second half of my escape plan comes in. The work my wife, Linda, has been doing – cycles of research, interviews, and report writing – takes her on trips of a day or two at a time, sometimes several in a week, anywhere in the country. A schedule of long hours and hard graft, the driving only adding to the stress. So we’ve agreed that I’ll take over the driving. Drop her off wherever she has to go, then while she’s at work, I’ll head for the nearest library to write. On – now I know about them – library PCs. The perfect solution.

The sticking point is that they told me I had to become a member to use Shropshire library computers, and I had to be local to become a member. What I’m going to need, so that I can join libraries wherever I happen to be, where I am not living, where I am not local, is some way of sidestepping the system. A way of making the extraordinary fortune that is the public library a nationwide, rather than municipal, resource. As I believe it should be. With the useful bonus that I could be, as any of us could be, a writer with offices across the country.

‘A hymn of praise to that everyday outpost of civilisation and culture, the library. Read it and fall back in love with those palaces of delight that should, and maybe one day will, grace every street corner and village centre again. Let those who dared to close libraries read this love letter and hang their heads in shame’

‘Following in the tyre tracks of the inter-war travel writer H.V. Morton, Bevis stitches overheard conversations about good lagers, unreliable printers and Only Fools and Horses into a state-of-the-nation collage. An eccentric homage and passionate clarion call’

‘Absolutely the sort of thing I love. With his very amusing take on things, John Bevis has basically been a mystery shopper at every library service in the country’

‘It’s such a great idea and such a fascinating project. I wish I’d thought of it first!’

‘Fans of Bill Bryson are sure to enjoy Bevis – his style has the same combination of fine observation and humane wit. For anyone who loves their local library, this gentle travelogue is a relaxing way to while away the hours until your next visit’

‘An insightful and perceptive guide to the library world. It is charming, endearing and very satisfying. The author captures the essence of the English library in the present age of austerity’

‘I loved a book sent to me called An English Library Journey, about someone who tries to join every library service in England...’ An editorial in Public Libraries News, accompanied by a short piece from John Bevis. 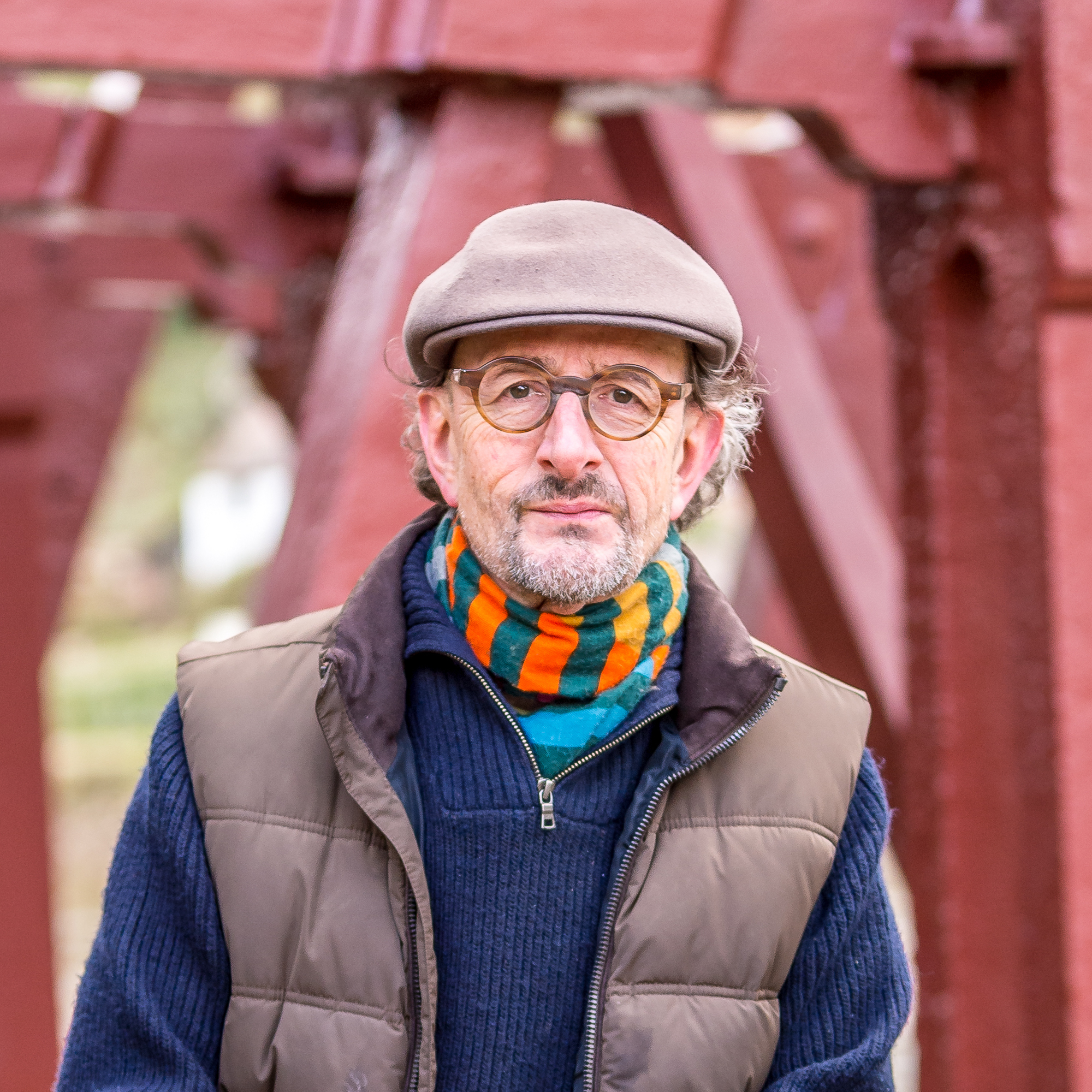 John Bevis has spent most of his working life with books: designing, printing and publishing them at Coracle Press; typesetting and proof-reading them at the Victoria and Albert Museum; retailing them at the Whitechapel Art Gallery bookshop; and purchasing them for a library agency.

Among his publications are collections of poetry; artist’s books, cards, prints and printed objects; catalogue essays; critical studies; true crime stories and biographies. Previous books include Aaaaw to Zzzzzd: The Words of Birds and The Keartons: Inventing Nature Photography.

He divides his time between Ironbridge in Shropshire and London.