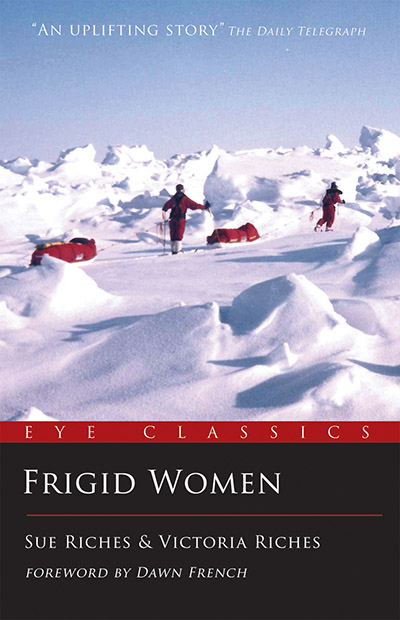 In 1997, a group of twenty women set out to become the world’s first all-female expedition to the North Pole. Sue and Victoria Riches were surprised to find themselves among them.

Travelling to the most isolated and forbidding regions of the globe and facing the bitterest hardships, both were seeking a new beginning. For Sue, these were the first steps following treatment for breast cancer. For her daughter Victoria, abandoning the security of her career was the sole way to test her self-belief.

This is Sue and Victoria’s personal account of their trials and survival in the Arctic. Honest, shocking, but never too serious, Frigid Women is a celebration of the positive, ‘anything is possible’ attitude that can transform life’s tribulations into its most rewarding experiences.

Without cancer it is very unlikely that I would have gone on the expedition. So out of evil comes good. It makes life much more fun always to have a goal. You are never too old to want to achieve something else, however tiny an aim it is. All I had to do was to get on with life with an immensely heightened awareness of the world around me, from flowers, skies, clouds, mountains to friends and family.

Without cancer it is very unlikely that I would have gone on the expedition. So out of evil comes good. It makes life much more fun always to have a goal. You are never too old to want to achieve something else, however tiny an aim it is. All I had to do was to get on with life with an immensely heightened awareness of the world around me, from flowers, skies, clouds, mountains to friends and family.

The next ordeal was the abseil. Something I had always wanted to do, but had never had the opportunity. It was one of the most exciting parts of the whole weekend. Imagine throwing yourself off a cliff when you cannot see the bottom. It was totally dark with a few stars twinkling. You step up to the edge of the cliff not knowing what is below you, attach the safety harness and launch yourself over the edge. The initial step is terrifying, but the thrill was wonderful. You have got to trust the person holding the rope at the top. Eventually all the teams got to the bottom, but no one knew what to do next. Part of the testing, we thought. Did we have time to eat something, or even light our stoves and cook, or should we just wait for orders?

What a day! It started off as a normal Arctic day, a very flat light and weak sun. We had floated six miles during the night and had a four and a half mile drift east. It was rather a misty sort of day, the sun eventually just about disappeared, but because of the lack of sun the ice appears bluer with a diffused light. There were rubble pans, then some semi-frozen leads, all right to cross quickly, but the ice was soft. After about five hours we came to more and more open water, which caused a sea mist to form because the sea is warmer than the air, about –2°C. Matty crossed a frozen lead, it was softish ice, but OK to cross. A sort of solid slush, a kind of jumble of ice chunks held together by the ice floes on each side, both of which were fairly large. Very much the kind of frozen lead that we had crossed countless times before without a second thought.

We all have a new sense of wonder now, realising the sheer power of nature. I certainly felt different, and looked down on the Arctic ice realising what we had done; not much compared to some expeditions, but we were very ordinary people, and I think that we showed others that you can have a dream – and achieve it. The strange thing was that however hostile the landscape, however frightening the events, however alien man is here, we did not feel threatened. We did not feel that the Arctic was against us, or at least more against us than anything else, considering this was not man’s natural environment.

“This story is a fantastic celebration of adventure, courage, friendship and love. Enjoy it, all you would be adventurers!”

“Their book captures the essence of Arctic travel. It shows that women can survive as well as men and keep their sense of humour. The achievement of these women should not be underestimated.”

“The intimate style of this account by the mother-and-daughter members of the expedition certainly adds another dimension to the ‘I may be some time…’ stiff-upper-lip school of polar adventure writing that has long been a male preserve. The authors render their often life-threatening experiences with humility, honesty and a vital sense of humour. Simply, the narrative is unique and gratifying in that it reveals the human side of an inhuman challenge.”

“Ice is now a fixture on bookshop travel shelves. One or two frozen beards made an appearance in 1998, but it was a pair of female polar travellers who stood out. Frigid Women by Sue and Victoria Riches, is the story of a mother and daughter who participated in the first all-female relay to the North Pole. It is an uplifting story – especially as the mother had just conquered breast cancer – and simply told.”

“They embrace an experience that many people would prefer to only read about.”

Also check out this 20th anniversary podcast by ESPN Films. 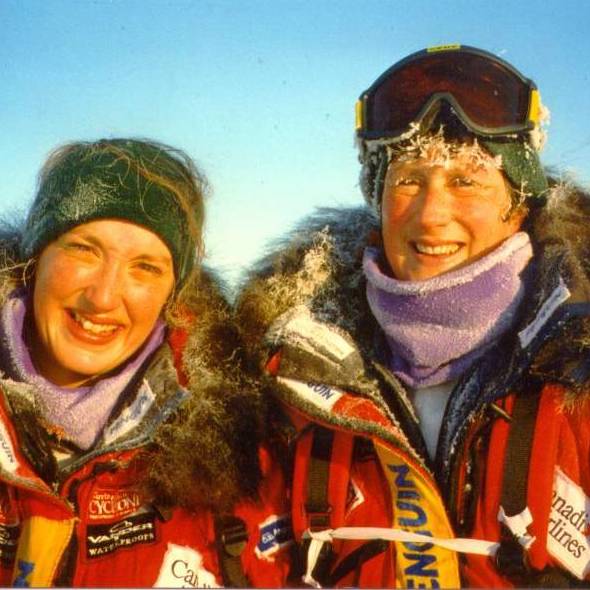 Sue Riches was born in 1946. Following school and a year in Paris she did a bilingual secretarial course, after which she worked in London for six months as a secretary.

In 1967, she married Jeremy, a solicitor, and had three children, Victoria, Philip, and Edward. She started a catering business in the early Eighties, which she ran for nearly twenty years, then opted for a career change after having breast cancer and a mastectomy, and became a teacher of English as a foreign language. She also completed an Open University degree,

She now lectures about her various travels to a huge variety of people, from small groups, to big companies or passengers on cruise ships. She loves travelling, especially on horses or bikes.

Victoria Riches was born in 1970. She was head girl at her school and was the first girl there to achieve the Duke of Edinburgh’s Gold Award.

She taught in Canada for a year before taking a degree in politics and history at Newcastle University. She then worked as a trainee manager at Marks and Spencer and spent three years as a recruitment consultant.

Following the North Pole expedition, she retrained as a primary school teacher and spent nine years teaching part time while also running her own company as a public-speaking and life coach and event organiser. She is married to Jeremy, a film cameraman. They have one son and live near Bath, where Victoria runs an online educational publishing company.

Read more about Sue and Victoria at www.anythingispossible.co.uk.