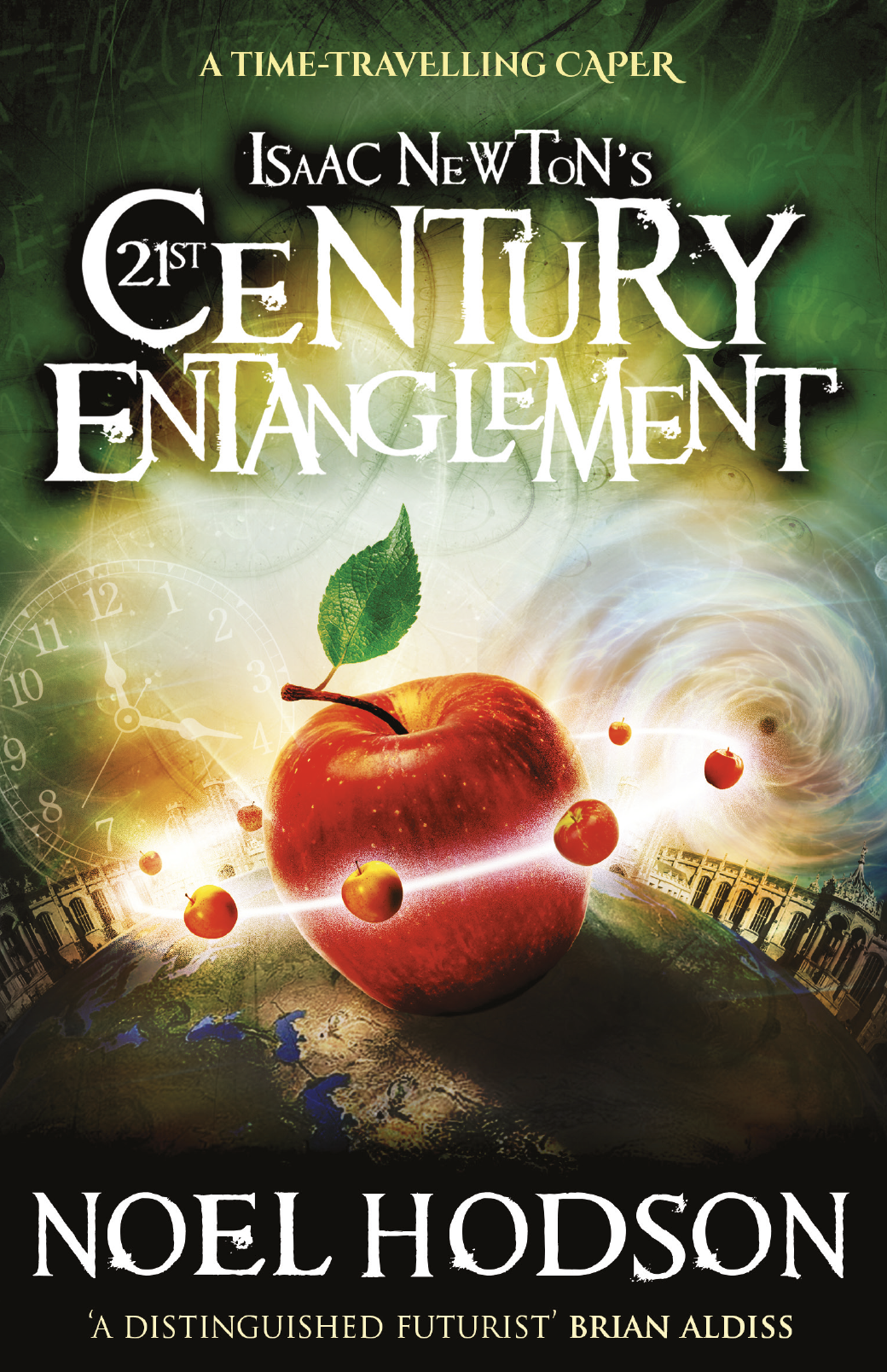 While quietly studying prisms and light on his family’s Lincolnshire farm in the plague year of 1666, Isaac Newton suddenly finds himself transported to 2018. There he meets young Archie, who assumes that this curious character on a country riverbank is a local bumpkin with a few marbles missing.

It turns out that Newton is quantumly entangled, the victim of an experiment with physical laws way beyond even his own revolutionary insight. He’s not the only one caught in this plight: Archie becomes entangled with Isaac, unwittingly riding the timelines too. The pair end up on the run in two different ages, pursued by panicky scientists and agents of the law in the twenty-first century, and facing potentially lethal accusations of sorcery in the seventeenth. Can the combined talents of Newton and his modern colleagues untangle the mess?

Noel Hodson’s playful novel takes the reader on a spin through some sound(ish) science and some only slightly improbable scenarios in the easiest, most enjoyable introduction to quantum physics around.

The man’s gaze – cold, intelligent and utterly concentrated, despite his feverish and fearful state – scanned the boy’s flesh for blemishes, for any lethal rashes or buboes, which must at all costs be avoided. He was hungry, and he was deeply chilled, but caution bade him stay concealed, stay hidden, and observe carefully. He needed to know that the boy was alone – and unmarked.

The man’s gaze – cold, intelligent and utterly concentrated, despite his feverish and fearful state – scanned the boy’s flesh for blemishes, for any lethal rashes or buboes, which must at all costs be avoided. He was hungry, and he was deeply chilled, but caution bade him stay concealed, stay hidden, and observe carefully. He needed to know that the boy was alone – and unmarked.

The boy, who was alone, would not have come to the river bank on this misty Fenland morning but for an error of timing beyond his control. Nor, synchronistically, would the man be lurking in the dense blackberry patch just ten feet from the boy if he too had not become entangled in an anachronistic accident. He desired to approach the boy but too many conflicting signals paralysed his will. The boy was strange; his hair cut short like a Roundhead. He wore strange clothes – clothes which were perfectly and exquisitely stitched and seamed, in rich and rare colours and textures; clothes which announced great wealth but of a cut and style the man had never before encountered. And there were unsettling rumbling and whining sounds which percolated through the mist that the man could not decipher. Were other villagers working nearby? Did the boy have friends close at hand?

Also, strangest of all, the trees, the endless forests of trees, which, yesterday, had stretched to the horizon, had all but disappeared.

The boy sat under a gnarled willow that showed the first signs of spring. He was watching the River Withan, with his back to a bramble-covered ruin. The man’s fierce focus on his face, neck and hands – on all his exposed skin – permeated his consciousness and made his hair prickle. He paused from delving into his bag and listened hard. He heard nothing out of the ordinary, shrugged and shifted his attention back to the food in his bag. He pulled out a box and, from the box, a fat package wrapped in kitchen foil. As the boy unwrapped his peanut-butter sandwiches, the man sniffed the damp air. He could smell food, reminding him he was ravenous, and he could not smell death, reassuring him that it was safe. Though was ‘safe’ a term he could apply to his present confusion?

His intellect whirled faster and faster in an attempt to process and rationalise the feedback from his senses but could not find sufficiently familiar sensations to anchor the kaleidoscopic information. He was dizzy and disoriented but a sudden flash of light glinting off the kitchen foil, cast aside a few feet away, captured his mind and drove out all other considerations.

He could see beyond doubt that it was silver-foil. But it was of such quality, consistency and fineness, beaten and finished with such skill by some unimaginable silversmith that the sheet varied not a jot in thinness across its whole area. It shone like Quicksilver and, despite its extreme fineness, it had not broken when the boy had wrinkled and creased it carelessly. It must be worth a King’s ransom, and yet not only had the boy crumpled the fabulous sheet in his hand, but he had unconcernedly tossed it aside like so much flotsam. Was the child deranged?

But as soon as these thoughts invaded his mind the boy started to eat – and the man could see and smell bread and fruit – fresh fruit, but how could that be, in early springtime? – which occluded all further thought. He had to risk the boy and he had to eat.

Sweeping off his wide-brimmed black hat to avoid damage from the thorns, the man, glad of his thick greatcoat, forced his way along the child-sized tunnel through the brambles and undergrowth to emerge immediately behind the boy – who swivelled his head, eyes wide with surprise.

The man had but one thought in his mind. He spoke with a broad local accent, ‘I’m hungry. I need food,’ and his eyes burned into the sandwich the boy was raising to his mouth.

The boy considered this for a moment in silence. He was ten years old and understood the imperatives of sudden hunger. ‘D’ya want a sandwich?’ he asked, with careless generosity.

The man stepped forward and reached out a hand. Then he withdrew very slightly and again scanned the boy’s flesh from close quarters for the deadly signs of plague. But he could see none. The boy’s skin looked firm and healthy. He took the proffered sandwich and smelt it curiously.

‘It’s peanut butter,’ explained the boy. ‘I’ve only got that – or maybe…’ he offered with careful reserve, ‘…a ChocoRoll if you’d like…’ Then, with sudden hope and inspiration: ‘Or you could have an apple or the orange… They’re dead nice – really nice. I’ll bet you’d like one.’

‘Noel Hodson takes the oddness of quantum entanglement and twists it to deliver a light-hearted, enjoyable caper that won’t tax your braincells’

‘A genius combination of science fiction, time travel, history and geekiness. Isaac Newton’s 21st Century Entanglement is a well-plotted, thought-provoking and clever read with a splendid twist at the end. Great fun’

‘An exciting and funny story, told a quick pace. I really enjoyed the duo of Isaac Newton and Archie’

My Treasure in Books

Noel Hodson explains the scientific background to his novel. 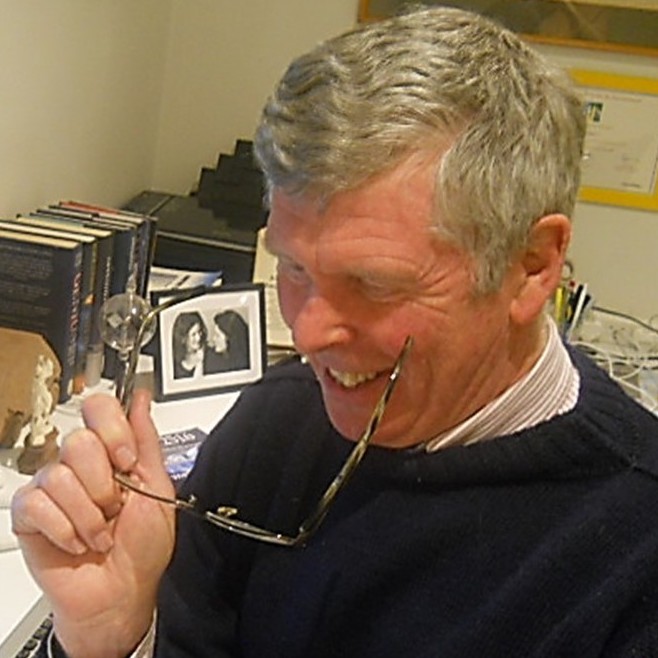 Noel Hodson has been fascinated by science, particularly physics, all his life. He has published both academic books and fiction and writes a blog, which now includes his own Theory of Everything and Gravity. Noel has one wife, two daughters, and three grandchildren – a mathematical progression. He lives in Oxford.