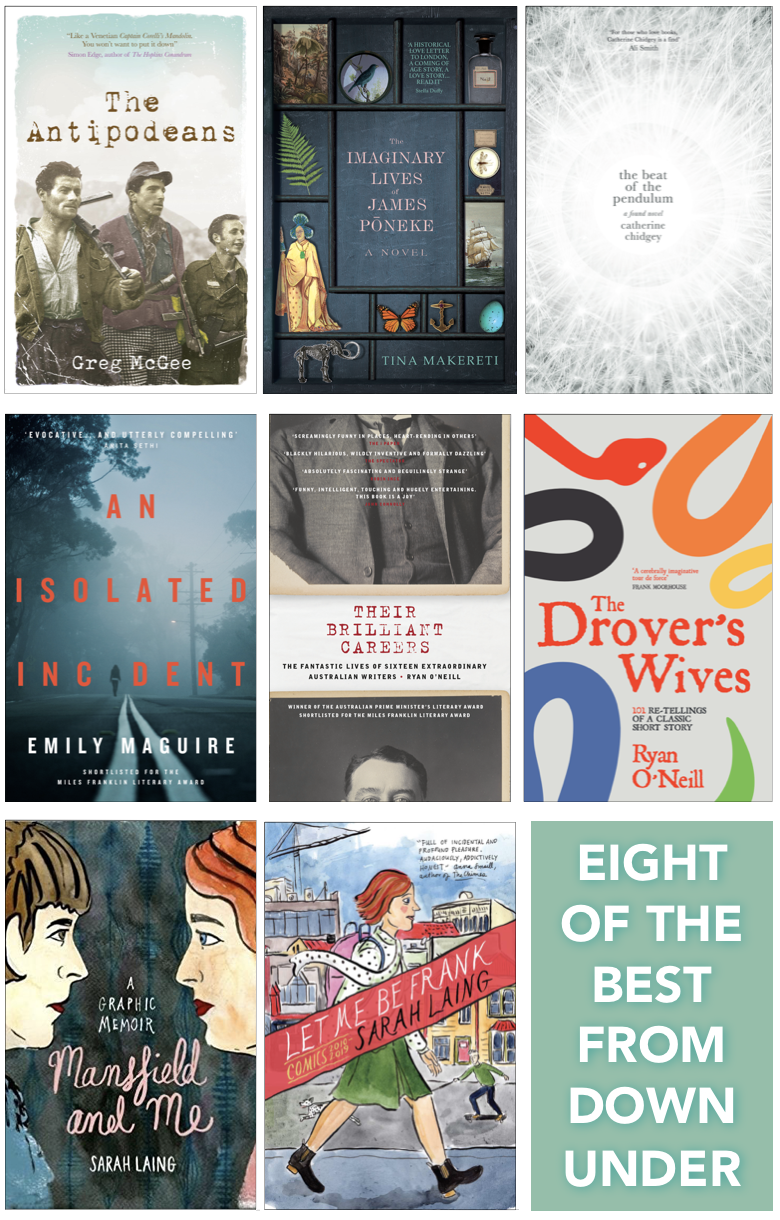 Eight of the best from Down Under

As well as publishing home-grown fiction, the Lightning imprint brings stellar writing from Australia and New Zealand to UK readers. The eight books in these brilliant-value bundle are all from award-winning novelists and graphic novelists.

The Antipodeans, Greg McGee’s three-generation saga about Kiwi prisoners-of-war in Italy, spent a year in the New Zealand bestseller charts and was longlisted for that country’s main literary prize

The Imaginary Lives of James Pōneke by Tina Makereti is an unforgettable work of historical fiction about a young Māori orphan who agrees to become a living exhibit in Victorian London; it was also longlisted for New Zealand’s main literary prize

The Beat of the Pendulum is a bold, funny and moving experimental novel by Catherine Chidgey, who records the words from her life over a year to forge a narrative from seemingly random snippets; also longlisted for New Zealand’s main literary prize

An Isolated Incident is a crime novel with a difference by Emily Maguire, in which ‘whodunnit’ is the least interesting question; it was shortlisted for Australia’s equivalent of the Booker Prize as well as its main women’s and crime-writing prizes

Their Brilliant Careers, by Scottish-born Ryan O’Neill, is a collection of spoof biographies of supposed Australian literary giants, fitting together to form an ingenious shadow plot; it won Australia’s most lucrative literary prize

Mansfield and Me, a sumptuous graphic novel by Sarah Laing, is a mix of memoir, biography and fantasy paying homage to New Zealand’s greatest writer, Katherine Mansfield; it was longlisted for the country’s main literary prize

‘Like a Venetian Captain Corelli’s Mandolin.... you won’t want to put it down’

Simon Edge on The Antipodeans

‘A historical love letter to London, a coming-of-age story, a love story… do yourself a favour, read it’

Stella Duffy on The Imaginary Lives of James Pōneke

‘For those who love books, Catherine Chidgey is a find’

Ali Smith on The Beat of the Pendulum

Ann Cleeves on An Isolated Incident

‘It’s glorious. So funny and clever and entertaining’

Marian Keyes on Their Brilliant Careers

‘I have never read a work like this before. A cerebrally imaginative tour de force’

Frank Moorhouse on The Drover’s Wives

‘This is a faultless, pitch-perfect book that made me laugh out loud, whilst also profoundly moving me. I defy anyone not to enjoy it. Sarah Laing is a genius’

Gerri Kimber on Mansfield and Me

Anna Smaill on Let Me Be Frank

‘Finding out how the past has shaped and informed the present gives this enthralling book the tautness of a thriller ... Remarkable’

New Zealand Listener on The Antipodeans

‘Remarkable...The descriptions of her mother’s illness are handled with both grace and a sense of pre-emptive commemoration. The relationship between grandmother and grandchild, one fogging in memory, one coming into memory, is done with admirable and touching truth’

The Guardian on The Beat of the Pendulum

‘Utterly engrossing... skilfully constructed narrative...Rather than creating a simple case of goodies and baddies, Maguire subtly examines the complexity of the human personality and what leads somebody to feel destructive…Hugely chilling and evocative’

‘Blackly hilarious and structurally audacious ... it offers something strange and often wonderful, a wildly inventive and formally dazzling reworking of both the tropes and traditions of Australian literature, and by extension Australian culture more generally’

The Spectator on Their Brilliant Careers

‘I was very taken with Mansfield and Me, which puts Sarah Laing’s life – her efforts to find herself as a writer – alongside the life of Katherine Mansfield, using the vocabulary of graphic art to tell the story’

Claire Armitstead, The Guardia on Mansfield and Me

‘I first encountered the character of Sarah Laing in her autobiographical online comic Let Me Be Frank and was instantly intoxicated by her mix of neuroticism, loopy handwritten text and probably-unintentional romanticism of mundane domestic reality’

Greg Bruce, New Zealand Herald on Let Me Be Frank