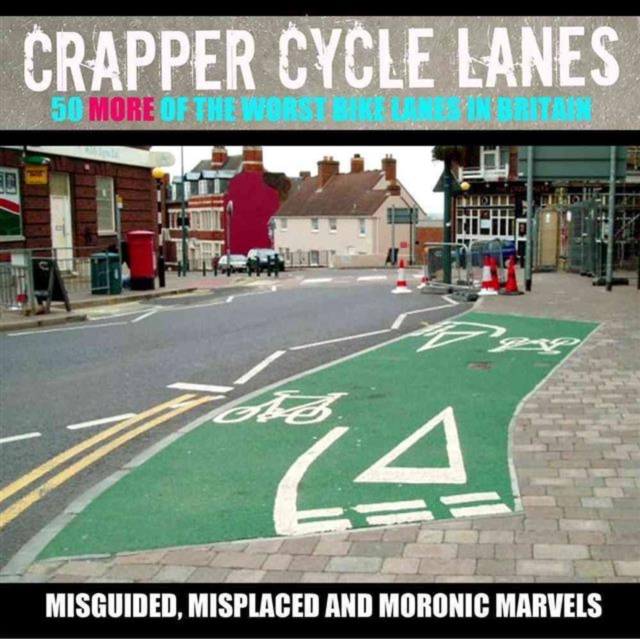 Crapper Cycle Lanes is a humorous guide to some of the worst cycle lanes in Britain. Councils around the land are investing your tax money to provide schemes to make cycling an easy and safe choice, as Britain grows in its awareness of its carbon footprint. Crapper Cycle Lanes exposes some of those schemes from the viewpoint of the people who pedal the roads. The practicality, difficulty and danger levels are rated, and a sentence is recommended for the offending council, ranging from a caution, through to an Asbo or for the worst cases, regime change.

It was nearly 10 years ago that Eye Books published the first Crap Cycle Lanes book based on the "Facility of the Month" website pages of Warrington Cycle Campaign. Since 2001 this has featured pictures of badly designed cycle provision every month. Normally when introducing a sequel to a publication a foreword would say how delighted the authors are to be able to continue their previous publishing success. But in the case of Crap Cycle Lanes and its sequel, Crapper Cycle Lanes, this foreword has to be tinged with some regret that such monstrosities are still being foisted on the UK population.

So, this book is testament to the continuing ability of traffic authorities to get things wrong by putting in cycle facilities that fail the functionality, practicality and sometimes safety test.

We should note, however, that improvements have been made in places. We considered naming and faming the best town councils, but the editorial decision was taken that pictures of “perfectly good cycle lanes” were not terribly riveting. At the same time, we feel the warm glow of satisfaction that maybe our little book helped in some way.

In our 2007 publication we called for the implementation of 20mph speed limits as the default for urban roads. In November 2007 20's Plenty for Us was set up to assist community campaigners who wanted 20mph limits and now over 320 local campaign groups have been formed around the UK. In fact this has been widely adopted by local authorities with most of the UK's iconic cities now setting 20mph limits for most roads. Now 16m people live in such places and our call is for this to become the national default. Wide-area 20mph limits have become best practice for making our streets better places to walk and cycle. See much more at www.20splenty.org

So please enjoy this book, we hope it will be the last of its kind we ever need to publish.

In 2007 we published the first edition of Crap Cycle Lanes. It was designed to raise awareness of some important issues of safety and convenience that Britain’s cyclists face, raise funds for British cycling charities and hopefully raise a smile.

We worked in conjunction with the Warrington Cycle Campaign, and we are proud to have been associated with this project, not least because it appears to have had some positive impact.

We know this because while researching for this second edition, quite a few people came back to us with a similar comment: that the original cr*pness of the cycle lane has been addressed. This probably has at least as much to do with the lobbying of groups and individuals at the local level, but we are daring to believe that our first book may have played a role here and there (if only to embolden said individuals to make a complaint).

So, being a fair-minded bunch, we have decided to do the right thing and devote a section of this new book to "The Good" (as opposed to the more amusing “Bad and the Ugly"), in which we highlight places where improvements have been made.

There is still a way to go. As long as the cycle lane remains the first resort in the placement of unnecessary street furniture, as long as town planners are satisfied that they have “made provision for cyclists” by designating a thirty-centimetre wide, twelve-metre long stretch of potholed tarmac as a cycle lane, our work will not be complete.

Satire can be a powerful weapon, but it is only the opening fusillade in the battle. If step one is aiming ridicule at an example of some mindless planning, steps two and three are sharing the news and doing something about it. A lone voice may not be enough to have a hazardous bollard removed, or a cycle path rerouted around a bus stop instead of through it, but communicating your concerns: with us at Eye Books, with the Warrington Cycle Campaign, with your local cycling group…

In an age where every politician wants to be seen to be cycle-friendly, there has never been a better time to make our voices heard. So, share this book with your cycling buddies and we will move forward in the hope that this edition will have at least as great an impact as the first.

A book for cyclists fits nicely with our back catalogue of books, many of which are about cycling expeditions. Please visit our homepage to find out about mammoth adventures that were conceived while pootling along a suburban backstreet. Maybe.